Shaft collar, an history of achievements in safety

Among the most basic components within the power transmission, the shaft collar are often underestimated. Yet their importance is demonstrated by their widespread use.

Retaining collars are used almost in all equipment and their field of use is much broader than you might imagine. 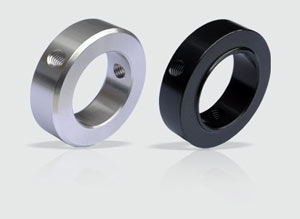 As autonomous elements are used in various applications, for example, as mechanical stops, positioning units of components and thrust bearing surfaces, but are often also used as accessories of other components to create mechanical units for different types of devices for power transmission such as engines and gearboxes.

The first mass-produced shaft collar were primarily used in broadcasting the first tree factories. It was ring-shaped rigid collars with locking pins quadra head protruding from the collar.

This type of collar was considered very dangerous because in applications where this was supposed to rotate, the head of the screw could become entangled in the workers ‘ clothing and drag them into the machine.

There were not many improvements until the early 1900 ‘s when Howard t. Hallowell, founder of a manufacturer of fasteners SPS Technologies, put the first collar with locking pins apiece. His “secure locking collar” was awarded a patent that soon became a reference point for the industry and, over time, was copied by the competition.

The invention opened the door to the recessed head screws, where the company is still considered a world leader. The original collars with locking pins are an alternative in clampcollars.

The absence of locking pins in this type of collar produces a result not to damage the shaft. The collars are, therefore, easier to remove and infinitely adjustable.